Resumen: We present a novel series of Chilean top‐income shares covering half a century, mainly based on income‐tax declarations and the National Accounts. Such a time frame of analysis is still rare in the literature of developing countries. We distinguish between a fiscal‐income series (1964–2017) and an adjusted series (1990–2017). The former covers individual income, while the latter also includes corporate undistributed profits, which affects both levels and trends. The fiscal‐income estimates start with low levels and a decreasing trend over the 1960s. They then increase rapidly during the dictatorship years (1973–89). The series ends with a high, yet slowly decreasing, concentration for most of the recent democratic period (1990–2017). By contrast, the adjusted series has followed a U‐shape since the return of democracy, contradicting the established consensus on falling inequality over the period. Furthermore, Chile ranks among the most unequal countries in both the OECD and Latin American countries over the period. 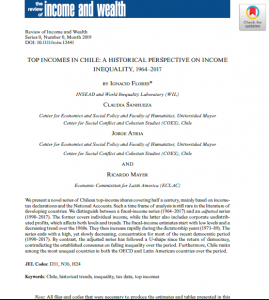